What can we say? The last year has been crazy with a whirlwind of ups and downs, chapters closing, new beginnings having sparked...nonetheless, we have a BUNCH of new music coming out, our newest single "Different Shades of Blue" releasing on February 10th!! Get ready for an awesome year, my friends, and be sure to come hang out with us at our show on Saturday, March 4th at Lost Lake. See you soon!

Along with the hopes to provide truth to their state's motto "Nothing Without Providence", Blue Mesa aims to captivate the hearts of their listeners with female vocals, both catchy and haunting, accompanied by driving melodic dueling guitars and a heavy hitting rhythm section. With this, Blue Mesa has created a rare and organic sound they are proud to call their own.

Circa 2014, in the Mile High city of Colorful Colorado, Blue Mesa was born. Immediately after forming, they began recording their first full length album “Providence”; jump-starting their vocation as musicians in the Denver music scene. In 2015 they placed in Hard Rock Rising’s international battle of the bands which then led to multiple shows opening for national touring acts in their hometown. Before taking a short hiatus to regroup, Blue Mesa released their Sophomore EP, “Origami” on June 24th of 2017. Following “Origami”, Blue Mesa released singles “Blindside”, "Fall Until I Fly", and "Straight Through Me".  All in which are available on all major online retailers.

They are currently in the writing process for their third album.

“Blue Mesa…[hasn’t] failed to make waves with their unapologetically visceral style which pairs female Pop Rock vocals with an anthemic guitar-led instrumental arrangement. The commercial potential which is surrounding this powerhouse of artists was palpable…They may be relatively fresh from their inception, but their ability to write stellar tracks has already matured past the point most artists could only hope to achieve.”

“The first thing that grabbed me about the performance was their diversity in apparent influences, ranging from Led Zeppelin to Queens of the Stone Age...Well-balanced guitars, solid drum work, and seamlessly complimentary bass lines accompanied by clean, talented, pop-ish female vocals.” 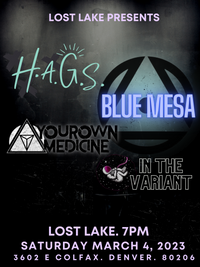 Saturday, March 4th, Blue Mesa will be hitting the stage at Lost Lake with Your Own Medicine, H.A.G.S, and In The Variant. Doors at 7:00pm - 8:00pm show time. Tickets available now!